–  A pair of peregrine falcons successfully nested on the Sault Ste. Marie International Bridge, where the birds have been returning for years, raising three chicks.
– Another pair of the endangered birds has successfully nested on the Portage Lake Lift Bridge again this year, hatching four chicks.
–  The peregrine falcon has been removed from the federal endangered species list but is listed as an endangered species in Michigan.

July 2, 2019 — It’s been a productive summer for Upper Peninsula bridges and their resident raptors, with peregrine falcons at the Sault Ste. Marie International Bridge successfully raising three chicks and the Portage Lake Lift Bridge between Houghton and Hancock seeing four hatchlings this spring.

On the eastern end of the U.P., Karl Hansen, bridge engineer for the International Bridge Administration (IBA), reported that a pair of peregrine falcons successfully nested atop the bridge between the U.S. and Canada this spring. Nest boxes for the peregrines have been installed since 2010 on the International Bridge. Last year, the same pair of peregrine falcons successfully nested on the International Bridge, hatching two chicks, one of which subsequently died. Still, year to year, the site has been a great success, hatching 28 falcon chicks since 2010, when the nest box was installed and IBA staff started counting the birds, Hansen said.

Last year, the IBA added a video camera trained on the nest box, the “FalCam,” which has proven very popular. The live video stream is viewable at www.saultbridge.com/falcam, offering bird watchers a front row seat for the seasonal return of the endangered raptors.

At the other end of the U.P., on the Portage Lake Lift Bridge, the Michigan Department of Transportation (MDOT) installed two nest boxes in 2012 – one each on the north and south bridge towers. A pair of falcons discovered the nesting site the next spring and has now raised a total of 19 chicks there. Webcams, viewable at http://pasty.com/nestbox.html, have been installed in cooperation with the Copper Country Audubon Society to allow people to watch nesting activity on both towers.

The falcons at the Lift Bridge chose the south tower box as a nesting site this year. Their four chicks were banded by a Michigan Department of Natural Resources (DNR) team on June 19, while the International Bridge birds were banded by a team on June 21. Color-coded bands attached to the legs of young birds allow scientists to track the movements, reproductive behavior and population growth of the falcons.

In addition to their leg bands, the peregrine chicks received names. At the International Bridge, the bridge staff named the two female chicks Bones and Zoey, while the male chick was named JC in honor of the 130th anniversary of the Sault Ste Marie Ontario Chamber of Commerce. In 1889, John Collins served as the first president of the group.

At the Lift Bridge, DNR and MDOT staff chose Finnish words to name the birds. The males were named Vesi (water) and Lumi (snow), while the females were dubbed Silta (bridge) and Kesa (summer). The new peregrines at both bridges should be ready to leave the nest in another few weeks.

Michigan lost its peregrine falcons in the 1960s and 1970s due to the use of DDT and other environmental contaminants. Since conservation efforts started in the mid-1980s, the number of peregrines has fluctuated, but has generally increased since the 1990s, according to DNR wildlife biologist Karen Cleveland.

”We’ve got two trends colliding right now: decommissioning of power plants that have traditionally hosted nest boxes, and pioneering birds rediscovering the cliffs of the U.P.,” Cleveland said. ”Several coal-fired power plants in both the southern Lower Peninsula and the U.P. are in some state of decommissioning, demolition, or sale.”

At the same time, new nests have been spotted and reported to the DNR, including a few new nests in the U.P. on cliffs and bluffs.

”It’s going to take a while to see what the overall state numbers look like after the plants are out of the picture,” Cleveland said. ”But it does look like the U.P. will be an important part of the peregrine’s story in Michigan going forward.”

The peregrine falcon has been removed from the federal endangered species list but is listed as an endangered species in Michigan, protected by state and federal law. Peregrines have adapted to city habitats, nesting on tall buildings, smokestacks and bridges around the world. In 2018, there were 37 man-made sites where falcon pairs were active statewide.

High-speed hunters capable of flying at 200 mph, the peregrines may help keep populations of nuisance pigeons under control. While researchers have found pigeons make up a relatively small portion of the falcon diet, the dangerous predators may play a role in frightening them away from bridges. Keeping pigeons away is seen as potentially saving MDOT and the IBA maintenance money down the line, as pigeon droppings can damage paint on metal bridge surfaces. 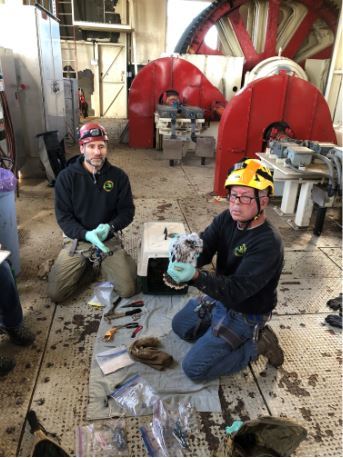 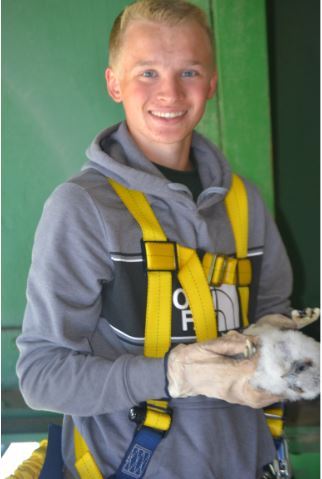 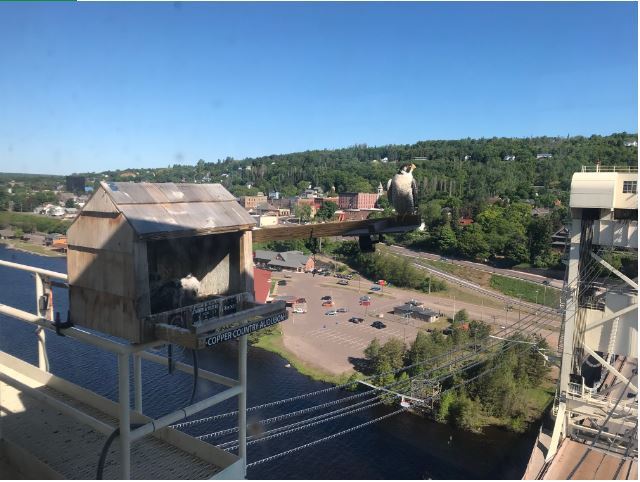 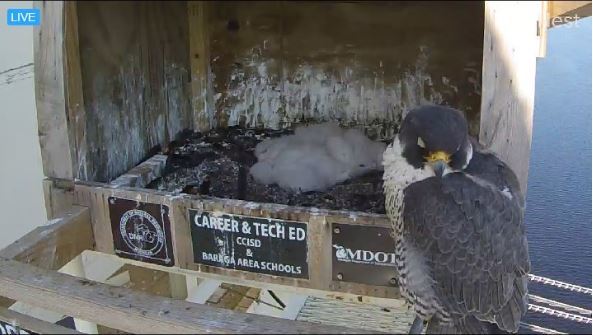 Falcons have success at International Bridge